The Spain Topographic GPS map from GarminWorldmaps offers a routable map for Garmin GPS devices on a basic scale of 1: 25,000. In addition to all kinds of roads you will find contour lines, trails, cross-country tracks, foot ways and cycle-ways on this map. The topographic map for Garmin navigation devices is great for hiking and mountain biking. This makes this map perfect for navigation and tour planning with a Garmin navigation device. The Map can also be installed on a PC or Mac computer. The map includes thousands of kilometers of road, cycling and walking trails. With its modern vector technology, the map always offers an optimal overview with maximum detail density. Individual elements, such as buildings, only become visible when you zoom in. By clicking on the individual elements, additional information such as name of the facility, type of business, information on streets and paths appear. The map contains addresses, street names, rivers, lakes, hills, country lanes, paths, point of interests, sights, public facilities such as train stations, train lines, airports, petrol stations, restaurants, hotels, campsites, hospitals, restaurants and many more.

Things to see in Spain

The Garmin Worldmaps are compatible with the following Garmin GPS devices. 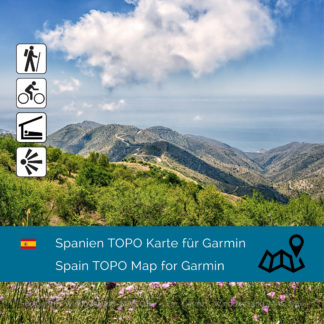 You're viewing: Topographic Map Spain for Garmin 14.90 €
Add to cart